From Ace. It’s after the jump because language.  (We try not to be potty mouths, here.)

END_OF_DOCUMENT_TOKEN_TO_BE_REPLACED

A twelve year old boy in Australia told his parents he was “transgendered” and wanted to be a girl. So, doing what enlightened progressive parents are supposed to do, they started him on hormone therapy to begin chemically mutilating his body into a crude facsimile of the opposite sex. What happened next was not supposed to happen.

An Australian schoolboy who decided to transition into a female has changed his mind two years later.

At just 12-years-old, Patrick Mitchell, begged with his mother to begin taking oestrogen hormones after doctors diagnosed him with gender dysphoria — a condition where a person experiences distress because there is a mismatch between their biological sex and gender identity.

After heeding advice from professionals who suggested that it was right choice, his mother was fully supportive and Mitchell began to transition.

He grew out his hair and started to take the hormones, which caused his body to grow breasts. But two years on, Mitchell had a change of heart.

In the beginning of 2017, teachers at school began to refer to him as a girl which triggered Mitchell to question if he had made the right decision.

“I began to realise I was actually comfortable in my body. Every day I just felt better,” he told Now To Love.

Maybe the caring adults in this kid’s life should have sought out mental health resources to help learn to love and accept his physical body. Gender dysphoria is, after all, a condition of the mind, not the body.

Especially among children, whom adults don’t trust to make any serious life choices unless there is a sexual proclivity attached to them. Adults don’t trust children to take an Ibuprofen tablet when they have a headache; but they are allowed unrestricted access to abortions and body altering hormones.

I think the  reason… the reason no one will admit to… is because unlike those other disorders, transgenderism is considered sexy and kinky. I have no proof, it’s just a feeling. Progressives identify with transsexuals because it seems like a kinky fetish. They’re into that.

And there are real world consequences to treating transgender dysmorphia like a disorder of the body instead of the mind. Suicide rates among post-operative transgendered people attest to this. But the point is, progressive societies are less concerned with helping people with body identity disorders than they are about feeling good about their feelings… and getting turned on.

A British transgender teen killed herself, supposedly because the school wouldn’t let her change her name.

A transgender teenager who killed himself “was angry with [his] school” after it refused to grant him permission to officially change his name, an inquest into his death has heard.
Leo Etherington had come out at home and at school – but teachers at Wycombe high school, an all-girls grammar school, told the 15-year-old that he could not change his name on the register for another year.
Giving evidence at an inquest into his son’s death, Martin Etherington said: “The school told him he had to be 16 to change his name. He said he was angry with the school.

I’m sorry, but if the kid offed herself over that… for that matter… couldn’t wait a few months … I don’t think you can call this a case of “bigotry-caused suicide.” That is, apparently, what you are supposed to think it is.

I wonder if the adults in this teenager’s life recognized the profound psychological problems she was obviously struggling with? Were they afraid to confront her for fear of being called bigots or H8Rs? Perhaps, losing their jobs and being publicly stigmatized for their ‘Hate Crime?” Or, were they merely blinded by the glow of their own virtue signaling as they praised Louise for her ‘courage’ and added ‘Transgender Teen’ to their collection of human Pokémon?

The politically correct belief is that the way to treat gender dysphoria is by indulging the sufferer’s delusion that they should be the opposite sex; that surgical and chemical mutilation of their body into a crude facsimile of the other sex will reconcile mind and body and resolve the disorder. What if this thinking is wrong? What if gender dysphoria is just a symptom or manifestation of more profound psychological issues that a sex-change merely papers over?

The mister and I were in Home Depot the other day looking at light fixtures, and an HD employee came up and did the old, “Can I help you find something?”

Said employee had long lustrous hair, a build like a high school middle linebacker, tiny boobs and a deep voice. We both thought (as we discussed in the car later) “Tranny,” but what-to-what we weren’t quite sure. So, what pronoun were we to use, should it come up? Fortunately it didn’t come up.

But I also wonder what if this person wasn’t even a Transgenderina? What if it was just a woman who had been genetically sideswiped? Or what if she was like someone I knew in college who, although female and straight, had a deep voice and a masculine build as a result of steroid treatments she had been given in puberty to fight cancer. If so, would she be offended if I assumed she was a Transgenderina?

This California “Use the Wrong Pronoun, Go to Prison” thing is a minefield. How is anyone supposed to read someone else’s mind and know how to offend them; when even asking them could potentially offend them.

A California school decided to celebrate when one its students “bravely” decided to go transgender. In fact, the teachers and administrators arranged a class party, where the dressed as a little girl, and teachers explained that all of his classmates had to indulge his transgender cosplay and treat “her” as a girl from then on.

It was a kindergarten class.

It. Was. A. Kindergarten. Class.
No one notified parents. And apparently some of the little rugrats came home terrified that their own sexes can suddenly change without notice.

The teacher defended her decision to read two children’s books about transgenderism including one titled “I am Jazz.” She says the books were given to her by a transgender child going through a transition.

“The kindergartners came home very confused, about whether or not you can pick your gender, whether or not they really were a boy or a girl,” said England.

Parents say besides the books, the transgender student at some point during class also changed clothes and was revealed as her true gender.

All this to satisfy the egos of some virtue-signaling progressive dimwit adults.

Elsewhere in the News of Completely Dysfunctional Crazy Stuff I Am Not Making Up: The Washington Post Editorializes in Favor of Satanism. Their reasoning… if it can be called that… is that (if you ignore the fact that the entire Slavery Abolition Movement was driven by Christian Churches)… Satanism is less racist (and therefore better) then Christianity.

It amazes me how many legit stories I have to skip over each day, for brevity or lack of time. As I made the following list, I skipped over many other worthwhile items.

I hope to do a post later on the week’s Awan Scandal news.

This is one perspective, and I know of no reason it should be considered illegitimate. I tend to agree that the reason for forcing the military to accept transgendered people is an emotional one. “It’s not fair!” is the tantrum-cry of a spoiled child, not a reason-based argument. To me, the question is whether the military will be better at its primary mission if transgendered people are in it. That should be the only question in consideration of what the rules ought to be.

END_OF_DOCUMENT_TOKEN_TO_BE_REPLACED 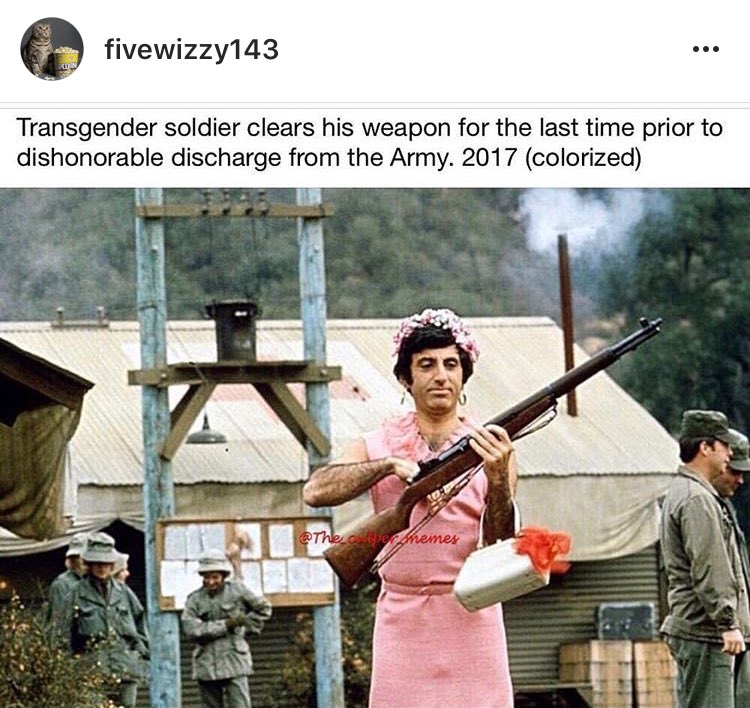 At the link, Caitlyn Jenner defends President Trump and expresses a belief in limited government and making the U.S. a better place to do business.

Of course I have mixed feelings about this. On the one hand, I’m glad to see Jenner saying sensible political things to a left-leaning audience. On the other hand, I know that Jenner has willingly served as either a source, or at least a mascot, for some of the rather foolish Transgender Fever that has swept America in the last year or two.

As to transgenders in general: I’m glad when they stand up for their legitimate rights as any human should – for example, practicing self-defense skills with Pink Pistols – and, I’m not glad when adult biological men think they have a right to impose their brand of political correctness on others, take over girls’ bathrooms, etc.

Overall, file this one under “People Are Complex”.

So, let’s check in with a representative of the ‘People in Denial About Biological Realities’ and see what today’s criterion for being enlightened and tolerant is.

I wonder if Zinnia Jones will be joining the HuffPo bus tour. Apparently, xe is one of their people.