Today, for the first time in two weeks, I find myself alone on my journey, not spending the night in a hotel with my family or in the homes of my friends (and family).  After leaving Atlanta this morning where I had a wonderful dinner with some of our readers (including one non-conservative fan of the blog) last night, I am making a pilgrimage (of sorts) to the Western Hemisphere shrine to the goddess Athene, the owl-eyed Olympian, and subject of my dissertation.

Me being me, I actually brought a bound print-out of the first six chapters of the paper into the temple.  Now, I sit in Centennial Park, looking up at the reproduction of Phidias’ classic building, grateful for my wireless card which allows me to blog and confident that the battery on my laptop will last long enough to allow me to post this. 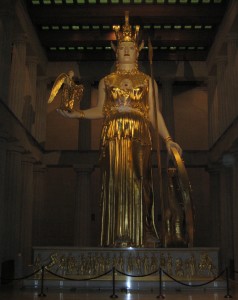 Now that I’m about to dine with some Atlanta readers, I wanted to remind y’all of our next dinner on my journey, a week from today, Wednesday, June 9 in Boston.

I intend to arrive in Boston on June 8 so I can do something I’ve never done before in Beantown (though have long wanted to do it) — take a walk along the Freedom Trail.  If any of you are free during the day on June 9, it would be great to trace the path of the original American patriots with some GayPatriot fans.

E-mail me to RSVP for either or both of those dinners (as well as the walk along Freedom Trail).

Please join on Wednesday June 2 for a dinner in Atlanta.  E-mail me to RSVP.

Other upcoming dinners include Boston one week later on Wednesday June 9 or Brattleboro, Vermont on Sunday, June 13.

I will also be passing through Cincinnati over the first weekend of June and would be delighted to get together with any readers who live in or near the town of my birth.  And will be in St. Louis on or about June 16.

Sometimes when I drive cross country, it seems certain states become cursed–at least for that particular journey.  When I drove east across Wyoming in 1998, it seemed everything went wrong in the home state of one of our nation’s greatest Vice Presidents.  And I was grateful to cross the line into Nebraska.

On this trip, it seemed there was a jinx (at least for me) on the freeways in the Tarheel State.   In Raleigh, Mapquest told me to get onto I-440 South, only when I reached the appropriate interchange, there was no 440 South, only East or West, yet each of those directions had been newly painted onto the signs.  I headed in the wrong direction and ended up exiting the freeway at an interchange that did not allow me to back on in the opposite direction.

Yesterday, a misty rain made driving difficult as well as straight male rubberneckers checking out an attractive young woman who had drive her car off the road and into a ditch in the median.  And while my co-blogger gave me perfect directions to his home, save for transposing the digits in the address in one (of two) texts identifying the location of his residence, the North Carolina Department of Transportation did not see fit to identify that the exit for North 485.

And this morning, I ended up heading in the wrong direction on that very freeway (this time possibly due to my own error) on my way to meet PatriotMom for breakfast.

Now while the Tarheel State may have been jinxed freeway-wise, it was anything but disappointing people wise.   END_OF_DOCUMENT_TOKEN_TO_BE_REPLACED

The three things I have most noticed about DC since returning for only the third time since I lived here in the 1990s is how few people smile (compared to LA), how many more smokers there are and how oppressive is the humidity.

Perhaps, oppressive is a bit harsh, but it does take some getting used to when you’re walking around downtown, especially when wearing a jacket and tie and toting a laptop.

It is weird to be back, a stranger in a city which was once my home.  I remain familiar with many of the places I pass, but they all seem different in some way.  Not to mention the new construction.

The oddest thing though is how easily I have been able to navigate the city’s streets.  I quickly remembered how things fit together.  When driving in, I didn’t need look at a map to find my way from I-95 South to central Arlington.

Why is it, I wonder, that people don’t smile as much as they do in LA.  Is it just the weather?  Was it like this when  I last lived here (in the Clinton era)?  Or does everyone now take themselves far more seriously now that a new man’s in charge.

Today, when I bought my Day Pass for the DC Metro, I was a little surprised to find a familiar face on the card: 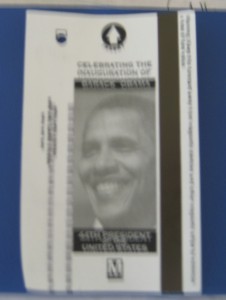 So, what is the president doing on a ticket to the public transportation system in our nation’s capital.  It says it’s celebrating his presidential inauguration.  But, I don’t recall seeing the image of Bill Clinton on such tickets when I lived in DC during his inaugural in 1997.  Nor do my friends require such images during his first inaugural.  Or for either of W’s.

And anyway, the inauguration was 16 months ago.

This is not where Americans place the image of our president.  This is something they do in authoritarian countries.

After a wonderful few days in the Big Apple and its suburbs, I’m heading down to my old haunts in and around our nation’s capital later this afternoon.

I encourage you to join me tonight at the debate between the first candidate we endorsed in this cycle, Matthew Berry and Patrick Murray, his rival for the Republican nomination to take out Democrat Jim Moran in Virginia’s Eighth Congressional District.

This debate follows the regular monthly meeting of the Arlington County Republican Committee, starting at 8 PM in the NRECA Conference Center, 4301 Wilson Boulevard, Arlington [Ballston].  This at North Taylor Street near the Ballston-MU Metro station.  For a map, go to www.arlingtongop.org.  There is free parking in NRECA garage.  (Enter from North Taylor Street.)

And afterwards, we will retreat to a local watering hole where the candidate will be joining us.

To RSVP for (or ask about) any of these events, just e-mail me.

Tomorrow night, Thursday May 27, some bloggers are holding a Happy Hour in my honor in the district.  You’re welcome to join us for that and a dinner to follow.  For location and to RSVP, just e-mail me.

Okay, so there appears to be a really big break in an issue which greatly concerns me when I have little time to address.  In between losing to my fifth eldest nephew in Ping Pong and celebrating with my third eldest niece who just become Bat Mitzvah, I have been having heart-to-hearts with my baby sister and talking myth with my mother while connecting with my older sister and reconnecting with college friends in New Jersey and having a wonderful dinner with a guy I dated in 1995 (who now lives in the Big Apple), we learn that the Administration has reached a compromise on repealing Don’t Ask/Don’t Tell as Nick reported here.

From what little I’ve read, my evaluation is that while this may not be an ideal solution, it does appear to be a step in the right direction.  Left-of-center blogress Pam Spaulding offers a somewhat skeptical perspective here and here.

. . . urges conservatives in the House and Senate to support the ‘Don’t Ask, Don’t Tell’ repeal compromise that was reached yesterday.  While this compromise isn’t perfect, it does take an important first step in removing the Clinton-era ‘Don’t Ask, Don’t Tell’ policy and returns the decision-making authority for the policy regarding gay service to the Department of Defense and the Commander-in-Chief.

We believe strongly that Congress should not be involved in micro-managing military personnel decisions.  Those decisions should be made by our military leaders – not by opportunistic politicians.

At the end of the day, conservatives should support a policy that best serves our men and women in uniform and our national security, and this compromise will insure that such a policy is implemented.

Seem that at least one Republican will be voting in favor of repeal.

In the coming days, let’s hope some reporters ferret out how this came to pass.  Looks like someone in the Administration is committed to doing the right thing.  And keeping the promises candidate Obama made on the campaign trail.

Just one last reminder about our dinner in New York tonight, Sunday, May 23.  Looks like it’ll be somewhere near Grand Central at about 7 PM. Please let me know if you can join me in the Big Apple.

Early Friday afternoon, after I rounded a bend heading east on I-80 in New Jersey, I looked up and saw the skyline of Manhattan and I smiled, recalling that almost exactly five days earlier — on the preceding Sunday, I had driven past the skyline of downtown Los Angeles as I headed east.

It was a pretty cool feeling, not diminished by the fact that this is now my eighth such trek across the country (so far three times round-trip and the drive I made when I moved to LA plus this one).

Of course, just a few minutes after looking forward to an early arrival at my sister’s, I encountered bumper-t0-bumper traffic leading up to the George Washington Bridge.  My sister had told me to tune into AM 1010 for traffic updates and I learned that I had a 30-minute wait.  Just about 28 minutes later, I pulled into the tollbooth.  Maybe 20 minutes after that I was with her family.

And while I didn’t have the time to stop and see the scenery as I had on past journeys, I did get to see family and friends, including my oldest nephew, now a Lieutenant in the Air Force as well as a friend from my College Republican days and a classmate from grad school.  I liked the combination of family as well as my political and mythological relationships.

Not to mention the chance I had to meet some of our readers in the Windy City.

The first time I did such a drive, I saw fewer friends and more scenery, discovering three national parks, Zion, Sequoia and Yosemite — and going on some pretty amazing hikes. END_OF_DOCUMENT_TOKEN_TO_BE_REPLACED