According to the UK Daily Mail, football thug Aaron Hernandez left behind three suicide notes. One to his fiancée, one to his daughter, and one to his prison boyfriend.

Sources close to the investigation tell DailyMail.com that the third letter was written to Hernandez’s gay prison lover, who has not been identified but was believed to be the last person Hernandez spoke to before he took his own life.

Now that man is currently under ‘eyeball to eyeball’ suicide watch.

Hernandez’s family, by the way, are continuing along the “avoid personal culpability” pathway, claiming alternately that Hernandez was murdered or killed himself due to traumatic brain injuries caused by the NFL.

Tomorrow, a lot my former colleagues in the National Capital Region will have the day off; possibly much of the week off. I’ll be at work since this part of “Flyover Country” was not affected by the Big Blizz. And you know what? That’s perfectly fine. Since leaving New Rome, I’ve discovered that the office isn’t so bad when it’s not on the other side of a ninety-minute commute. It’s also better when you don’t have to work for a horrid boss.

Not to go into too much detail, but the management at my previous company hired a very, very bad person to head the department I worked in. I could write an entire Management book based on her. The letter I left at my exit interview was twelve pages long, single-spaced, and accompanied by a PowerPoint demonstration that just listed and categorized the humiliations, petty gamesmanship, unprofessional behavior, general incompetence, and actual physical abuse she had demonstrated since coming on board. I don’t think I was alone, since no fewer than twelve people resigned from our department between the time she came in and the time I left; and our department was only about 20 people.

This person, called her “Bebe,” was obsessed above all else with how things looked to upper management. She actually spent as little time as possible working with our department as she could, because she was trying to get in on every Executive Level meeting, even when it had nothing to do with her. Anyway, there were several people in our department who worked flexible hours and telecommuted; they had been hired in with that promise. It was especially valuable for mothers who had to work schedules around their children and the always horrible DC/NOVA traffic. She implemented a policy of ‘Core Hours,’ meaning everyone had to be in the office from 8:30 to 5:30, because … I am not making this up… “It looks bad when one of the VP’s walks through and sees a bunch of empty cubicles.”

And there was worse. Much much worse than that, but I don’t want to turn this post into a long, whiny diatribe. But I thought maybe others had terrible boss stories they would like to share with the class. 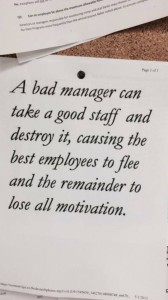 So, after three posts of looking back at 2015, it’s time to look ahead a bit. So, here’s a handful of can’t miss predictions:

END_OF_DOCUMENT_TOKEN_TO_BE_REPLACED

Until Further notice, probably later tonight/early tomorrow, comments are disabled as we are migrating the site to a more robust system.Â  Any new posts or comments after this will not be transferred over.
Thanks for your patience.

Today, my brother (who had sat with my Mom during her operation) joined my sister, step-sister and myself in my Mom’s hospital room and showed us a picture he had received in an e-mail. Â As he had trouble forwarding it from his hand-held device, I decided to google the e-mail’s subject and sure enough found that a blogger had covered the very issue.

When I saw this picture, I was laughing so hard I was crying. It even helped cheer my Mom up (if she could be more cheered than having three of her six kids with her).

Seems some clerk in the bakery of a Wal-mart took a phone-in order a bit too literally:

She’s leading in early New Hampshire returns and Michael Barone (on FoxNews right now) thinks she could hold her lead.

Moving this post to the top. Right now, it’s 7:23 PM on the West Coast, 10:23 on the East Coast and it looks like Ms. Hillary’s going to pull this one out. A narrow victory which might have seemed disappointing a week ago, now is a big win for the former First Lady. And guarantees that this race will go to SuperDuper Tuesday, if not the Democratic National Convention in Denver.

AP has just called the race for Hillary.

GP UPDATE:  I was curious as to how the lefty bloggers were viewing Hillary’s win tonight…. here’s a flavor from John Aravosis at AmericaBlog:  “If Hillary wins this, first, it’s a huge victory for her. But. And the but is important. The debate will be as to how Obama had a double-digit lead coming into today and suddenly lost in a matter of hours? We suspect there will be two schools of thought – either Hillary won because New Hampshire is racist, or she won because she cried. Either way, not a great message. Having said that, if she wins, she wins, and it’s a win she desperately needed, so it’s still a good thing.”