Like the individual, the less aware a culture is of its own proclivities to change, the more likely it seems that society or individual…

Non-self-conscious social change is the gold standard of societal growth. People who too often talk about things they are going to do tend to not only never do them, but also tend to be way out of their depths to begin with. This isn’t to say that the deep desire for change isn’t one that should not spark a desperate yearning for it. It’s just to say that for those of us who have experienced change on an individual level know that it is a gentle, almost effortless process (when the time is right).

There is also a difference to be made here when it comes to the concept of growth. Growth is not change in this instance. Growth can be thought of as going from point A1 to point A2. Change on the other hand, is moving from point A1 to point 5Q. Individuals who want to be a completely different person from who they were (perhaps from drug addiction or from an abusive upbringing) can tell you that the process of absolute personal change is impossible. It is possible to grow but that individual still holds the imprint of their trauma (and for good reason).

Societal change happens over generations, unlike the individual who has one lifetime to change. If you’ve noticed an acceleration of headlines that promote ideas akin to 2 + 2 = 5, well congrats on waking up – the hour is late. An enlightened society, living not in delusions of itself would stop itself from pushing any political propaganda onto toddlers but alas, the call for fundamental societal change is an “absolute good” (says the person with zero personal self interest).

Montgomery County Elementary School, “They’re not too young to talk about race.” 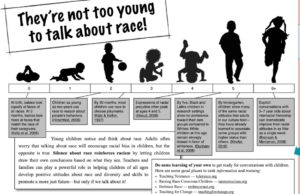 Are you done punching your monitor?

Societal change that is born out of commonality is the type of change we have enjoyed for many years. It doesn’t make too big a sound either. Like the man busy at work on his own life, high change (growth) happens without him needing to boast about it.  A common point of exception is made around the topic of desegregation which were fought in the courts and on the streets quite loudly. But societal change had been building for years with the only hold-out being the official governmental law-changes that stood in its way of a just and total victory.  We are pointed to groups like the KKK as a way of debating this point, that the existance of such a group stands in the way of an entire society existing outside of their evils. As the left loves to repeat ad infinitum “Not all (insert group here)”!

We all like to play the hero, so of course, those who pushed themselves to the front of the line and took these issues to court, or marched are deemed the change agents. They may have been the spark but the rocket fuel was already well established at that point.

Today we are faced with highly self-conscious societal change. We are so self conscious we have stepped into modern struggle sessions to repent for age-old slip-ups that would normally be forgive. The zero-sum game that we are engaged in that of a highly self-conscious society ready to tear itself limb from limb over “cultural appropriation”.  I want to go back to a growing America, not a fundamentally changing one.

The trial of the 45th President begins tomorrow and the Trump legal team has put out a spirited, sometimes fiery, but well-reasoned defense. One matter that they vigorously push back on is the House’s assertion that a government official, in this case the President, is not afforded the same First Amendment protections of ordinary citizens.  I call this the Goldfinger Exception after the famous scene in the classic Bond film. And just like in that film, a Mr. Bond saves the day! The House Managers say:

This is a breathtaking assertion. It is also directly contradicted by Supreme Court precedent, which the defense brilliantly points out. Indeed, Trump’s lawyers note that the House doesn’t even bother to quote court opinions — they instead rely on blog posts to back this mangling of our most cherished freedom. One of the relevant cases is Bond v. Floyd, which involved the GA state legislature voting to prohibit the seating of Julian Bond because he spoke out against the war in Vietnam. Bond sued in federal court, and won. As the Trump legal team explains:

“When the state argued ‘that even though such a citizen [Bond, elected to GA’s House] might be protected by his First Amendment rights, the State may nonetheless apply a stricter standard to its legislators[,]’ the Supreme Court responded tersely, ‘We do not agree[,]'”

And citing the landmark New York Times v. Sullivan case, Justice Brennan (of all people) went on to conclude:

“The manifest function of the First Amendment in a representative government requires that legislators be given the widest latitude toexpress their views on issues of policy. The central commitment of the First Amendment…is that ‘debate on public issues should be uninhibited, robust, and wide-open.’”

So there we have it. Bond, Julian Bond, shows us just how the House’s assertions are “malarkey.”

Not liking sports teams and/or athletes because they “win too much” is a lib mentality.

Yes I said it Tom Brady haters, it’s a lib mentality disliking number one. Envy under the guise of fairness is the first step into left wing politics. Left-wingers tend to be raging with envy and drowning in statistical discrepancies, driving them mad (starting to sound familiar?). The fresh-out-of-college, historically disadvantaged minority activists, crazy people – this coalition of voters and activists (the true believers) hate anyone who stand out and displays greatness. A steady diet of rights and victimhood will do that to a person, after all.

Standing out from the crowd is and always will be replete with risk. Competency and aspiration are now more risky than ever as “cancellation” becomes the modern day guillotine. Genuflect for your ‘privilege’ and partake in a modern Maoist struggle session.

Greatness should inspire and serve you, not take anything away from what you have or don’t have. Without those striving upward toward greatness, we are left with mediocrity as the standard bearer.  We are left with morbidly obese Calvin Klein models on billboards in Times Square. We are left with ugliness. Do not begrudge those who achieve great things in the modern era, the stakes are far too high right now. It is more important than ever to stand out and be great. 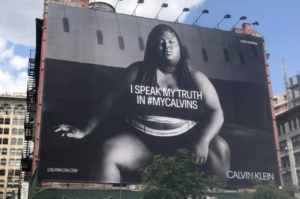 Greatness is uplifting, endlessly fascinating, beautiful, and everything the left hates. If the idea of Tom Brady reaching the level of greatness that comes once every hundred years in sports bothers you because “it’s someone else’s turn”, you are displaying the lib mentality that is corrosive to our shared reality.

Part of the reason for the reboot of the GayPatriot blog is my Twitter addiction. I joined Twitter in 2007, and fell in love with the brevity and the instant feedback from followers.

That addiction resulted in my brain ‘thinking’ in 180, then 240 characters. My desire to ‘long form’ blog died off as writing tweets became my creative attention span.

However, as most of you know, the free-flowing and fun days of Twitter are long behind us. From 2007 to 2018, I tweeted from the infamous Twitter handle – @GayPatriot.

I had built up quite a following too; over 75,000 followers.

But left-wing loons went after me in 2018 and that handle was permanently banned (including my IP address and cellphone number!).

So, as the story goes, I’ve had at least 10 different handles from 2018 through yesterday.

But it appears the anti-conservative cancel squad found me while I was tweeting about the Super Bowl last night. Once again, I’ve been banned by Big Tech. Such is life in 2021.

I have rebooted this site in part to make sure my voice is heard and people can find me and join in a conversation with me. Thanks for being a part of our GayPatriot community, everyone!

Declaring comedy to be dead is not exactly for me to say. However, what I can declare is that establishment comedy (ie Hollywood blockbusters and Late Night programming has been dead for years).

Every now and then an SNL skit will crawl its way onto my news feed. Every now and then I risk wasting my time by seeing what the current cast is up to and every time I find myself questioning what I just watched and what went so horribly wrong. The skits that are passed around usually come packaged with a “Spot on” or “Omg yessss“. As we know the true sign of a knee-slapper can be summed up by declaratives akin to “this is a reference that I know and THAT is what makes it funny because it is true”.

To lend an olive branch – there is plenty of “funny” still going on in places like Youtube (for now) and in underground comedy circuits. A lot of the folks that would have you falling off your chair are banned from the internet (but we aren’t allowed to admit that). However, I believe the Late Night and Hollywood dry spell we seem to be living through is in direct correlation to the amount of EASY and GENUINELY funny opportunities and observations that are passed up in the name of not offending the “wrong” people. (HINT HINT: It’s political. HINT HINT: It’s democrats). 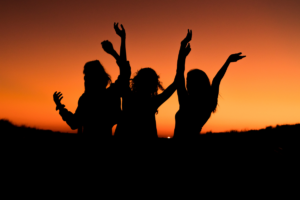 Laughter, it seems, is now passé and gauche. How else would you still keep your zombie audience feeling good about themselves and continue to grind out hot garbage. This and using the show to promote the latest “celebrity” who danced the right dance have robbed the audiences of the kind of unbridled laughter that “The Californians” or Norm Macdonald’s irreverence brought.

A self-satisfied “Yesss” or “So true” has replaced the belly laugh and the kind of squirm-in-your-chair experience of an uncomfortable truth being said in just the right way and at just the right moment.