While China, Russia and Iran may not be natural allies, “the enemy of my enemy is my friend” and they’re getting together to oppose the U.S. I’ve suggested before that President Obama’s efforts to isolate Russia are only goading these countries in their ongoing efforts to create a non-U.S. system for world trade and finance, a system that other countries (Germany, other BRICs, etc.) would come to do business with. Eventually bringing about the decline (or overthrow) of the U.S. dollar as the world’s key currency.

Hat tip to Zero Hedge, which has long covered this story and furnished several of the above links.

Did you know that since 2009, the BRICS countries (Brazil, Russia, India, China, South Africa) have had a summit each year where, basically, they plot a new world financial system with a greatly reduced role for the West, and the U.S. dollar? 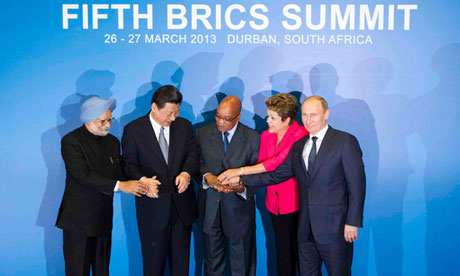 This will be a long explanation. I’ll keep it as neutral as I can (not expressing outrage in any direction).

The dollar is (or has been) the chief currency of international trade and finance. The international oil trade, for example, is settled almost entirely in dollars. This is part of why America has gotten away with decades of trade deficits.

A trade deficit means, among other things, that other countries want to give us real goods (produced by their workers) in exchange for our paper money. That’s intuitively unfair; it gives us extra goods from other countries’ production. Why would other countries do it? Because, up to now, they’ve liked getting the dollars. They have wanted to have dollars in their back pocket (say for buying oil, etc.).

And that’s part of the reason (just one part!) why U.S. inflation statistics have stayed moderate, in the face of the Federal Reserve’s policy of massive “QE” or money-printing. Other countries have absorbed some of our excess dollars. To the extent that such a country wants to keep its currency’s value in line with the (declining) dollar, it must create more of its own money, sort of matching its dollar inflows. That inflicts inflation on its people. In effect, the U.S. has been able to export inflation to other countries.

It’s a cushy arrangement for the parts of the U.S. that live off the Fed’s money-creating machine (or get effectively bailed out by it). In other words: cushy for the U.S. Big Government – Big Banking complex.

Those Americans who know about it, often take it for granted. They’ll say things like “Oh, of course we can get away with it. The dollar is too entrenched for other countries to get rid of it. Of course other countries want our dollar, and they will keep wanting it, no matter if we keep over-printing it.”

But history shows that no country stays at the center of world trade and finance (enjoying exorbitant privileges) for more than 50-80 years. This post is about the fact that America is, in historical terms, nearing the end of its run.

The first BRIC summit was in 2009. As The Guardian puts it:

…Brazil, Russia, India and China expressed mounting dissatisfaction with the inertia in [current world financial] institutions (the International Monetary Fund and the World Bank) and agreed to “advance the reform of international financial institutions, so as to reflect changes in the global economy.” Russia’s president, Dmitri Medvedev, said the main point of the meeting was to show that “the Bric should create conditions for a more just world order.”

“A more just world order.” Get it?

It’s code for knocking down Western influence, including the U.S. dollar. Thus ending the privileges just described; the privilege of the U.S. endlessly bailing itself out by creating new money and then exporting the inflation (or some of it) to other countries via trade deficits, which give Americans cheap foreign goods. Or the privilege (for Europe) of an IMF that bails out profligate European countries, such as Greece, and helps buy Ukrainian revolutions on Russia’s doorstep.

The BRICS countries know they can’t change things overnight. But each year, they move the ball forward a little. Last year’s summit (2013) saw an announcement that they would create a BRICS Development Bank, designed to duplicate the functions of the IMF and World Bank on the BRICS’ terms. The 2014 summit should see the announcement of some progress. For example, in September, they agreed on how the bank should be capitalized at $100 billion.

Some Westerners think the duplication-of-effort is stupid (for example, see Laurson and Pieler, at Forbes). Or they scratch their head over why it’s happening and whether the 5 BRICS countries will keep it together. Such criticisms miss the point.

The point is that the IMF and World Bank serve Western interests; and the BRICS countries, who are the up-and-coming powers, are tired of it. They will create duplicate institutions in some form, so as to be able to leave the Western-oriented ones or at least bypass them. Not surprisingly, non-Western observers get it.

We are moving to a world which increasingly rejects Western influence, especially American financial and political influence. For example, last October, Chinese media openly called for a “de-Americanized world”.

I blame 20 years of bad U.S. policies which have debauched the dollar, abandoned freedom, and given America a phony economy of endless deficits and debts, welfare, bubbles and bailouts. Policies which President Obama has obstinately made much worse. But however that might be, the “de-Americanized world” is coming. It is no surprise to see India and China tilting Russian in the Ukraine crisis.

In the bigger picture, it will mean foreigners needing a lot fewer U.S. dollars. When that happens, America’s inflationary chickens will come home to roost. As foreigners return their dollars to America in contempt, we won’t be able to run trade deficits anymore, and the dollar’s international buying power will go down. The cost of imported goods will skyrocket, and U.S. inflation with them. America will face some tough times.

In case you haven’t seen this already on The Gateway Pundit: