The state Senate on Thursday approved a measure that would gradually raise the minimum wage in California from the current $8 an hour to $13 in 2017, despite warnings from the California Chamber of Commerce that the bill is a “job killer.”

Sen. Mark Leno (D-San Francisco) said his bill is necessary to help lift many of the 7.9 million Californians being paid minimum wage out of poverty. “Income inequality has been spoken of by our president as the defining challenge of our time,” Leno told his colleagues.

He said the current minimum wage is so low it allows many who receive it to get public assistance. “It is our tax dollars that are subsidizing the largest corporations paying these poverty wages.” Leno said. No other state has a minimum wage of $13 an hour…

The “Related” was added by the LA Times (when I pasted the text). Fitting, isn’t it? Because the measure would actually keep poor Californians in poverty, increase inequality, and push more people onto public assistance. Is that Leno’s real goal?

But not trendy enough for the Swiss: in May, they rejected a high minimum wage by a huge margin. (The Swiss proposal would have been $25/hr by exchange rates, or $14 by PPP adjustment.)

Take a gander at this screen capture.  Interesting juxtaposition between ad and article, no? 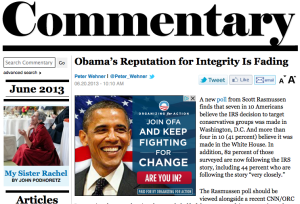 Question for the day: does his perpetual campaigning help compromise the Democrat’ “Reputation for Integrity”?

And please tell me how did Mr. Obama acquired such a reputation? Through his actions? (What specific actions helped him earn it?)

Recep Tayyip Erdogan traveled to two cities where unrest has occurred and again condemned his detractors as “a handful of looters” and vandals.

In the southern city of Adana, where pro- and anti-government protesters clashed Saturday night, Erdogan greeted supporters from the top of a bus before lashing out at his opponents in the highly polarized country

If he wanted to defuse the situation, he might do well to acknowledge the protestor’s grievances rather than insult them.

Another nation’s leader said that Erdogan, the prime minister of Turkey, “is one of the few foreign leaders with whom he has developed “’friendships and the bonds of trust.’”

Andrea Mitchell: ‘More Than Any of Its Predecessors,’ Obama Administration Has Targeted Journalists

Earlier today, I caught Jim Hoft’s report on ties between the National Treasury Employees Union (NTEU, which represents, among others, employees of the Internal Revenue Service (IRS)) and the Democratic Party.  Jim links us to the NTEU’s release just following the 2012 election where its president Colleen M. Kelley congratulated Obama on his reelection and noted the efforts her government employee union made on behalf of that Democrat.

Commenting on a report that President Obama met with Miss Kelley “the day before agency targeted Tea Party“, Ace wonders, as should we all, about the strange coincidence and considers the meaning of the meeting. He surmises how events might have unfolded in circumstances similar to this one, with a hypothetical President Tee meeting with the head of Union N which had supported him politically:

It would seem that President Tee could choose to go outside the normal chain of command to issue an illegal order by simply telling the head of Union N to inform the union members she leads to pursue the policy, rather than issuing a formal order to the head of the IRS.

Ace spins out an interesting scenario which, given what we know about Chicago politics, does not seem that far-fetched.  That said, I’m with Ace who disagrees with the authors of the report he linked; “I don’t think this meeting is a smoking gun,” but I do think it is significant and news outlets should report it.

And journalists should be asking Jay Carney, in his next press briefing, to tell us what transpired in that meeting.  And they should ask the president as well.  Reporters should be doing what they can to learn what passed between the president and the union boss in March 2010.

UPDATE:  Maybe there is nothing to that meeting.  But, the time is indeed curious.

RELATED:  Over on the National Review’s home page, Andrew Stiles has a good piece on Miss Kelley’s union:

The IRS may be “an independent enforcement agency with only two political appointees,” in the words of White House press secretary Jay Carney, but its employees are represented by a powerful, deeply partisan union whose boss has publicly disparaged the Tea Party and criticized the Republican party for having ties to it.

White House officials on Sunday dismissed Republican attacks over three simmering scandals as a partisan witch hunt, hoping to put behind them President Obama’s single worst week in office and to move Washington’s attention back to his second-term agenda.

While Obama was delivering a commencement address at the historically black Morehouse College in Atlanta, his top surrogates fanned out across the Sunday morning talk shows to defuse claims that the administration has violated constitutional boundaries and to blame the controversies on partisan politics as usual.

“We’ve seen this playbook from the Republicans before,” Dan Pfeiffer, a senior Obama adviser, said on NBC’s “Meet the Press.” “What they want to do when they’re lacking a positive agenda is try to drag Washington into a swamp of partisan fishing expeditions, trumped-up hearings and false allegations. We’re not going to let that happen.”

Well, they wouldn’t need go on any fishing expeditions if Mr. Pfeiffer and his team would just answer the questions Republicans have been asking. It’s unfortunate that instead of answering those questions, Mr. Pfeiffer has chosen to blame Republicans.

Wish Mr. Pfeiffer had instead listened to his boss who just over four years ago spelled out for Jay Leno what he intended to do as President of the United States, including breaking that “pattern in Washington where everybody is always looking for somebody else to blame.”

“There is“, writes Gabriel Malor at Ace of Spades,

. . . a fundamental disconnect between the White House’s actions and the White House’s words on the IRS scandal. The White House has repeatedly claimed that the President is “outraged” over the targeting — but there are surprisingly few actual consequences for outraging the leader of the free world. One of the folks involved in harassing conservatives got a promotion. Another got several thousands of dollars in bonuses. Even the thought of legal consequences is tossed aside as “irrelevant.”

The president’s outrage coincides with the story of the IRS scandal hitting the headlines.  Interestingly, as Jonah Goldberg observed on Friday, when people the president “views as his ‘enemies’” first “complained about a politicized IRS, what did he do? Nothing.”

If Obama were truly outraged by the targeting, he would have ordered the IRS to investigate as soon as the first reports became public.  And would use stronger terms than he has.  He would be ordering the Treasury Secretary not just to hold “those responsible for these failures accountable”, but would also be making clear that those responsible could lose their jobs — and face prosecution.

To note, as per Jonah’s point, the president didn’t ask the immediate past Treasury Secretary to take action when the story first came to light.  Nor has he specified how those responsible would be held accountable.

Doesn’t seem like the consequences will be very severe.

“[E]ven among Obama voters,” writes Heather Long in Friday’s Guardian, reflecting on a variety of factors, including the number of scandals coming to light, “there should be genuine disappointment. This not the President Obama we voted for, not even close.”

She talks about the excitement and exhilaration people felt in 2008 when Obama was elected:

It was mostly young people marching – from varied backgrounds. Many of these parades ended up in front of the White House where chants of “goodbye Bush” (or some variation thereof) began. It was the same slogan heard as Barack Obama was sworn in as president in January 2009 and Bush flew away in a helicopter.

There was a belief, especially among voters in their 20s and 30s, that Obama was going to be different. That his promises to “change the culture in Washington” were real. That his administration wouldn’t be beholden to lobbyists and conduct executive power grabs.

Interesting how part of their celebration relates to the departure of the much (and usually wrongly) maligned immediate past President of the United States.

What evidence, beyond the candidate’s rhetoric, did they have that Barack Obama was an agent of change?

They were clearly not aware, as many conservatives reported in 2008, that the great Democratic hope had always been a loyal foot soldier in the Chicago Democratic machine.  In his twelve years as an elected official based in that city, Barack Obama failed to challenged its authority — as he failed to root out corrupt practices and cronyism that defined its government.

His record, as we have pointed out repeatedly, was at odds with his rhetoric.

We (that is, conservative and libertarian bloggers and pundits) told you that back in 2008.  We told you that you were voting for an image crafted by political consultants and projected onto a charismatic Chicago politician with a mellifluous speaking voice.   But, you were so eager to see George W. Bush replaced that you trusted the words of man who delighted in maligning that Republican, but about whom you knew very little.  And are only now seeing as he is today — and was back then.

“According to documents obtained by the Committees, EPA readily granted FOIA fee waivers for environmental allies, effectively subsidizing them, while denying fee waivers and making the FOIA process more difficult for states and conservative groups,” wrote Republican lawmakers, including Rep. Darrell Issa and Sens. David Vitter, Chuck Grassley and Jim Inhofe in a letter to the EPA.

Maybe we misheard Obama back in ’08; he wasn’t saying post-partisan, but most partisan.