Yes folks, it is true what you’ve been hearing the past couple of days.Â  We here in the Queen City are without gasoline.Â  Of course it is affecting the normal folks like me who just want to fill up the tank.Â  But it is also impacting schools (they are closed — buses can’t fill up), and law enforcement (imagine calling 911 and being told “we can’t come — no fuel).

Drivers across the Charlotte region are waiting patiently — and, in some cases, impatiently — for a promised large shipment of gasoline expected to reach the Queen City by afternoon.

But the lines and traffic disruptions that dominated on Thursday continue this morning, with people in some cases having parked at gas stations overnight, waiting near the pumps with their tanks on empty. As was the case yesterday, arguments and scuffles are breaking out as frustrations boil over.

At about 8:30 this morning, a woman in line at a Citgo station in Charlotte’s Plaza Midwood neighborhood told others in line she was saving a place for her father, who was on his way with gas cans. The station, at Parkwood Avenue and The Plaza, was selling only premium gas. The wait was about 45 minutes.

When I flew back into Charlotte-Douglas Airport last night, I went quickly to hunt out three gas stations I know about near the airport.Â  All pumps were closed and police were guarding the businesses.

PatriotMom reported witnessing yesterday a foreign invader (Florida tags) butt in front of the whole gas line at a station in South Carolina and people getting quite angry.

I had planned to get some photos of gas lines (they are miles long) today.Â  People are lining up at a station at there mere rumor that a tanker truck is on its way with petrol.

This photo is courtesy of the Charlotte Observer — but I don’t live very far from this gas station in South Charlotte. 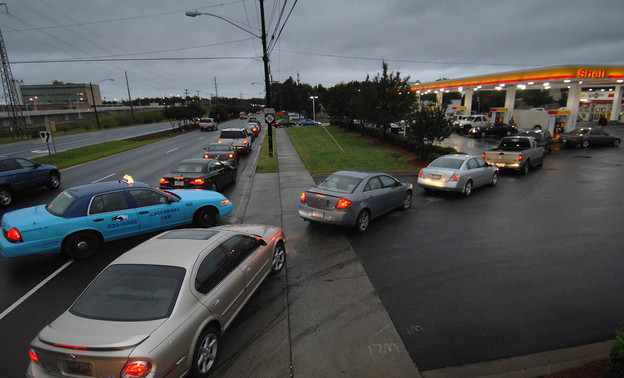 However, my own gas tank is so low that I don’t have the luxury yet of going out until I know for sure there is a guarantee I’ll get gas.Â Â  I will take my camera with me though in case I have to sit in a long line later this weekend.

Why is all this happening in Charlotte this week, you may ask?

The shortage is caused by the hurricanes that hit the Gulf Coast this month, disrupting refinery production. Refineries had enough fuel in reserve to stock southeastern pumps for a week or so, but it ran out before the refineries could get back to full production.

The Charlotte area is served by the Colonial pipeline, which told Carolinas officials yesterday that they were delivering a large shipment of fuel to Spartanburg, S.C., and that an even larger shipment would arrive in Charlotte this afternoon. N.C. Gov. Mike Easley asked several oil companies to release additional supplies from Tennessee and Wilmington.

Remind me again why Democrats are opposed to drilling US oil reserves?