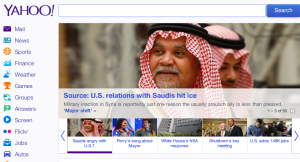 The article, Saudi spy chief says Riyadh to ‘shift away from U.S.’ over Syria, Iran

To be sure, the Saudis have their own problems, but if our diplomats were a bit more, shall we say, deft in the dealings with our allies, we might have been able to avoid this.

UPDATE (from Jeff): Lots of irony here. First, the article sort-of-implies that Saudi Arabia was behind Kerry and Obama’s sudden, urgent push in August for a Syria war. (Once again, the Left *is* what it accuses the Right of.) Second, if the Saudis are shifting ‘away from’ U.S. protection, the article ought to state whose protection they are shifting ‘to’. I’ll say it: either Russia or China. Which is not good. Apart from the implied failure of the U.S. to contain Iran, it brings us a step closer to the world’s eventual rejection of the U.S. dollar as the basis of international trade. Whether through policies of insane spending/deficit/debt at home, or flailing incompetence abroad (no grand scheme), Obama is getting the U.S.’ world position to unravel. “Thanks, Obama!”

Eight days ago, Air Force Colonel George Everett “Bud” Day passed away. He was a hero; as Mary Katherine Ham put it, “a veteran of World War II and Vietnam, a combat pilot famous for his defiance in the face of five years of torture in the Hanoi Hilton, a veterans advocate…” – and a man who received the Medal of Honor.

Not least of his accomplishments was in the 2004 Presidential campaign, when Col. Day helped educate Americans about the lying (and treasonous) John F. Kerry. Col. Day was part of the Swift Vets and POWs for Truth, which exposed Kerry and which, to this day, suffers left-wing slander for it. (I mentioned Col. Day in an early guest post on the Swift Vets.)

Col. Day was also a staunch McCain supporter – but hey, no one is perfect. Thank you, Col. Day, for your many services to America! God bless you! 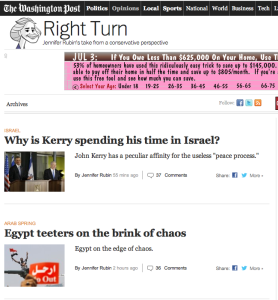