Addendum about the march’s organizers: END_OF_DOCUMENT_TOKEN_TO_BE_REPLACED

The Anti-Defamation League published an article, From Alt Right to Alt Lite: Naming the Hate. Just one problem: The article is a disgrace. It may target some actual racists, but along the way, it smears several citizen-journalists who merely challenge the Left, believe in the West or in Christianity, and/or support President Trump.

Presumbably to avoid libel lawsuits, the ADL tries to distinguish between “Alt Right” and “Alt Lite”. It says “Alt Right” is about “overt racism, anti-Semitism, xenophobia, misogyny, and anti-Muslim bigotry”; while “Alt Lite” would only be about the “misogyny and xenophobia” part. But the false guilt-by-association is still there. And even the lesser charge of “misogyny and xenophobia” is a smear on some fine and ever-improving journalists.

Of the ADL’s “Alt Lite” list, I know the work of three fairly well, and none of them deserve the ADL’s smear-labeling: Jack Posobiec, Mike Cernovich, Milo Yiannopoulis.

If the ADL is zero-for-three on those whose work I do know, they are probably wrong on the others whom they listed in the “Alt Lite” section. (Note: I’m not defending anyone in the “Alt Right” section, none of whose work I know at all, except perhaps for Nathan Damigo whose organization I denounced, here.)

To take one example, Jack Posobiec is fluent in at least 2 foreign languages (Mandarin and Polish are the ones that I’ve seen him speak), and here he is at Auschwitz with his girlfriend, praying for the Holocaust victims: 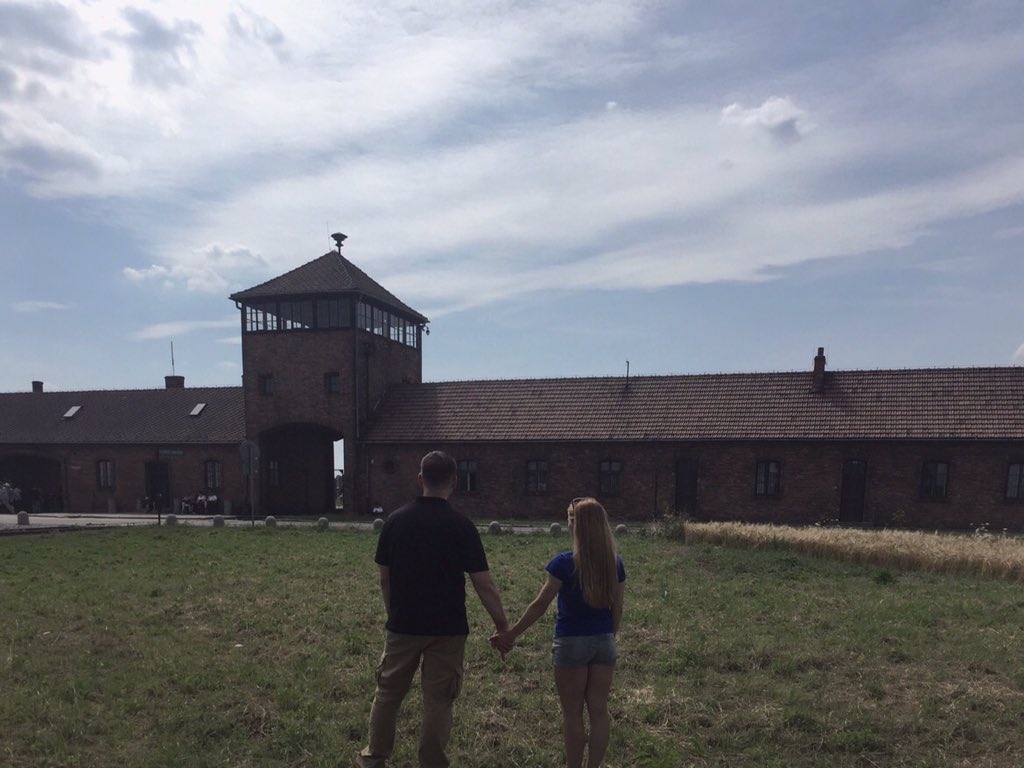 So much for his supposed “misogyny and xenophobia”. Which, I can say, are not in his work either – except that he just happens to be a reasonable and articulate Trump supporter, pro-Israel Christian, and opponent of the Left.

It seems the Anti-Defamation League has itself become a hate group. They would rather defame good people than refute the statements or ideas that they disagree with. It’s sad to see a once-important organization fall so low.

Just to follow up on part 1 about CNN openly staging a fake protest that they’d wanted, here’s a nifty list.

Like all such lists, it suffers from being anecdotal and agenda-driven. And (in this case) badly mis-titled. Some (hi rusty 😉 ) won’t like it that the list comes from Cernovich.

But I’m interested in what’s in it. I have seen most of these instances myself, at one time or another. I think it’s silly to trust CNN. If people ask me why, here are some of the examples I’d point to.

And more that I could probably find, if I searched GP archives.

This refers to Monday’s drama where The Washington Post alleged that President Trump had inappropriately leaked intelligence to the Russians.

First, why should anyone care what Mike Cernovich thinks? Because lately, he’s been breaking stories. He seems to have sources. His claims are outlandish; and then they turn out to be on the right track (though not 100% on all details).

So, here he is on the WaPo story. It’s a long video. Listening at 1.5x speed helps. Or I can just tell you his key points. Disclaimer – take this as his opinion and speculation. I’m interested mainly to see if it’s going to come true again?

As to Seth Rich: Per Cernovich,

I do recall that former FBI Director Comey has been a strong supporter of CrowdStrike and their report; for example in his testimony before Congress. It is remarkable how many different actions of Comey’s over the years have helped Democrats and/or Clintons.

Today, Eli Lake at Bloomberg confirms that McMaster wants to send up to 50,000 ground troops to Syria. And “has been quietly pressing his colleagues to question the underlying assumptions of a draft war plan against the Islamic State that would maintain only a light U.S. ground troop presence in Syria…to facilitate a better interagency process to develop Trump’s new strategy to defeat [ISIS].”

The real news is that Trump has said no to McMaster – at least for the time being. Kudos to those GP commenters who advised me, more or less, that Trump is his own man and wouldn’ t automatically go with McMaster.

As to the rest: it sounds like Cernovich dropped the nuances and exaggerated what was left, but still got much of the essence. And ahead of Bloomberg. Here’s a similar example, this one with Judge Napolitano.

In March, Napolitano claimed that, in spying on Trump, Obama went around U.S. laws that would restrict such spying by having a British intelligence agency access the U.S. NSA surveillance databases, then pass along findings. Obama and the British denied it vehemently.

Today, CNN confirms that “British intelligence passed Trump associates’ communications with Russians on to US counterparts.” CNN suggests that the British did the surveilling themselves, a difference from Napolitano’s story. Still, the British did it under intelligence-sharing agreements and to me, it sounds like Napolitano was in the ballpark.

The real news is that CNN still has no substantive Russian collusion to report against Trump.