Obama’s aides want you to know that just because Obama was yukking it up and fist-bumping literally half an hour after eulogizing James Foley after he was beheaded by Mohammedan savages (or as Obama calls them “folks“), that his actions “did not reflect the depths of his grief” over missing that two-foot putt on the 13th hole.

Chicks on the Right thought you might want to know a little more about Obama’s golfing buddies. 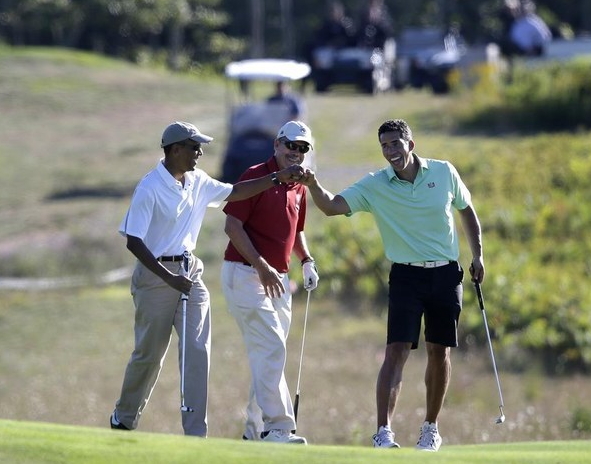 Center: Glenn Hutchins, mutli-millionaire founder of private equity firm Silver Lake Partners (which was a defendant in a collusion lawsuit this year along with Bain Capital and recently settled out of court for $30-million)
Right: Cyrus Walker, a millionaire lobbyist for Chatman LLC, a lobbying firm for the health insurance industry in Deleware
Left: The current President who campaigned against both private equity firms and also political lobbyist organizations, whose golf game apparently comes before important matters as well as his own integrity

And yet, there are lot of stupid people who believe Democrats are “the party of the little guy.”  (You know who you are.)