A number of conservative commentators and writers have been speculating for some time how long it will be from the time it is implemented until Obamacare collapses under the weight of its own poorly-conceived structure.  I think few have anticipated the situation we’ve been witnessing in the past two weeks, where first the administration announces that businesses won’t have to comply with the “employer mandate” until January 2015, and more recently, that the administration won’t be investigating eligibility for Obamacare subsidies, thereby opening the door to massive fraud and abuse.

Although the reasons that the Obama administration is making these changes are cynically transparent to anyone who realizes that the Democrats don’t want to lose big in the 2014 election cycle when voters will have a chance to express their displeasure with Obamacare at the ballot box once again, the more interesting question at the moment concerns the meaning and implications of the administration’s latest maneuvers for its ability to enact policies and govern going forward.

I think some people believe the public is paying closer attention to all this than is most likely the case, but that doesn’t mean I’m not enjoying the triumphalism and mockery of the administration’s opponents.  After the last election, it’s refreshing to see the administration increasingly on the defensive over the actions it has taken with regard to its signature piece of legislation.  Even better is getting to watch the likes of Dick Durbin (D-IL) admit that the disastrous bill “needs changes and improvements.”

But beyond getting to see and hear the bill’s defenders feel the heat, it is gratifying to see pieces like this one speculating that the Republicans in Congress may wise up enough about the administration’s actions to finally kill “immigration reform”:

“They have shown no respect for traditional Constitutional separation of powers,” Rep. Phil Roe, R-Tenn., told National Review‘s John Fund about the impact of the Obamacare delays on the immigration debate, “and that makes it difficult to pass laws where the fear is that they will simply ignore the parts they don’t like.”

Rep. Raul Labrador, R-Idaho, who is on the House Judiciary Committee and had been a member of a bipartisan group working on immigration reform, echoed Roe’s concerns on Meet the Press. “In fact, if you look at this Obamacare debacle that they have right now, this administration is actually deciding when and where to actually enforce the law. And that’s what some of us in the House are concerned about. If you give to this administration the authority to decide when they’re going to enforce the law, how they’re going to enforce the law … what’s going to happen is that we’re going to give legalization to 11 million people and Janet Napolitano is going to come to Congress and tell us that the border is already secure and nothing else needs to happen.”

Even the Wall Street Journal is writing about the administration’s actions in language reminiscent of that we saw with the rise of the Tea Party four years ago:

President Obama’s decision last week to suspend the employer mandate of the Affordable Care Act may be welcome relief to businesses affected by this provision, but it raises grave concerns about his understanding of the role of the executive in our system of government

This matter—the limits of executive power—has deep historical roots. During the period of royal absolutism, English monarchs asserted a right to dispense with parliamentary statutes they disliked. King James II’s use of the prerogative was a key grievance that lead to the Glorious Revolution of 1688. The very first provision of the English Bill of Rights of 1689—the most important precursor to the U.S. Constitution—declared that “the pretended power of suspending of laws, or the execution of laws, by regal authority, without consent of parliament, is illegal.”

Needless to say we can certainly hope that this lively piece by Tony Katz on Townhall.com is more than just a humorous reflection on the administration’s latest foibles:

For years the Right has said that the Obama Administration was thuggish, was hell bent on revenge, and was vindictive.

The IRS scandal was perhaps the tipping point. At first, The Left tried claimed that not just conservative and tea party groups, but progressives as well had been targeted. But, as the Inspector General’s report showed, that was not the case. Obama’s minions attacked Americans who disagreed with him. The Left knows they voted for hate.

Obama is not the man (messiah) they thought he was. The Left was blinded by his skin color and duped by mainstream media.

Lets not let them ever forget it.

“As the full implementation of the 2010 Affordable Care Act nears,” writes Elizabeth Mendes of Gallup,

Americans remain wary of the law and of what kind of impact it will have on their family’s healthcare situation and the nation’s overall healthcare situation. Those without health insurance — a group that most benefits from the new law — are slightly more likely to see it as having a positive effect, but even they are not ardent supporters.

52 percent of Americans disapprove of the “Affordable Care Act,” with solid pluralities (47-34 and 42-22, respectively) believing it will worsen both the healthcare situation in the U.S. as well as that of their own family.

No wonder the “White House is working to recruit Hollywood stars for efforts to promote the healthcare reform law“. Wonder if they will do a better job selling the bill than the president himself has done.

Despite the Democrat’s years of salesmanship, only a handful of polls have shown the health care overhaul enjoying a plurality of popular support, with many, like this Gallup survey as well as those from FoxNews and CNN showing majority opposition.

H/t RealClearPolitics where their poll average has consistently shown more people opposing than favoring the legislation: 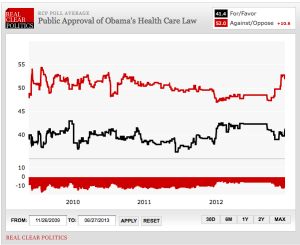 ADDENDUM:  Interesting to note how opposition to the policy has shot up in recent days.

Something strange happened with the latest jobs report.  A few lamestream press outlets woke up from their Obama-induced daze long enough to recognize that although the unemployment figure is purportedly lower than it was in March, and lower than it has been in some time, things don’t seem quite right with the numbers.   Just seeing them grapple with the data and begin to recognize its implications has brought on my latest instance of Obamacare Schadenfreude.

Let’s begin with the National Journal.  Today its website ran a story entitled “Forget the Unemployment Rate: The Alarming Stat Is the Number of ‘Missing Workers.'”  The story begins by summarizing the “unexpected” state of affairs:

The glaring caveat to this jobs report is the huge number of Americans who remain out of the workforce. Called the “labor force participation rate” in wonkspeak, that number held steady in April at 63.3 percent—the lowest level since 1979.

The story goes on to speculate about the causes behind the decreased labor force participation rate, explaining that some of the number–but by no means all–can be explained by the fact that the first of the baby boomers have now reached retirement age.  The article says that beyond retirees, “Roughly 3 million to 5 million of them left because they could not find jobs, economists estimate.”

But the article doesn’t stop there.  It recognizes that decreased labor force participation has serious economic implications for government because it decreases revenues coming in from taxes.  Suddenly, in other words, the decreasing labor force in the United States is much more of a matter of concern than it was a year ago when Obama was facing re-election, because it doesn’t bode well for the future of the economy or the budget (something that conservatives have been pointing out for years):

If these workers do not return to the labor market, their absence may alter the country’s budget picture. “One of the biggest problems we face with the baby-boomer bulge in retirement is having enough workers behind them to pay their bills,” says Harry Holzer, a professor at Georgetown University’s Public Policy Institute.

Missing workers can translate to a decrease in tax revenue, coupled with an increase in the use of government benefits, such as food stamps and disability insurance. The number of Americans collecting food stamps hit a high of 47.8 million people in December 2012. A similar spike has occurred in enrollments for the Social Security disability payments.

Since the start of 2007, the percentage of Americans in the labor market has dropped from 66.4 percent to 63.3 percent. In the 1970s and 1980s, the number of working Americans grew—because of the dramatic increase in women holding jobs outside of the home.

Nancy Cook ends her article by quoting a very optimistic prediction that unemployment will eventually fall to around 5.5% by 2017, but then she notes, ominously, “Only then can economists gauge if people have left the workforce because of the downturn in the economy, or if they’ve left forever because the economy fundamentally changed. If that’s the case, the U.S. officially will become a place where the labor market has little use for millions of Americans.”

The National Journal article, though, isn’t the only such piece by a lamestream press outlet today.  None other than the Gray Lady herself suddenly woke up and noticed the missing workers: END_OF_DOCUMENT_TOKEN_TO_BE_REPLACED