Liberals (or Progressives, or Leftists, depending on the degree of honesty with which they are willing to label themselves) especially feminists are fanatical about shutting off avenues of Free Speech that questions their dogma. Some feminists demand that, when a speaker they don’t agree with comes to a college campus, they must be given safe spaces with coloring books and stuffed animals, lest the mere presence of such a speaker cause them trauma. Some feminists have demanded making the entire internet a “Safe Space” by outright banning of disagreeable comments from the internet.

The correct response for those of us who cherish open discourse is to label spaces where free and open dialogue occurs as “Danger Spaces.” First of all, it sounds cool. Second, it creates a dramatic contrast with the the prissy “Safe Spaces” demanded by the feminist left. Third, it brands Free Speech as something dangerous and exciting and thereby encourages people to seek it out.

Fourth, and I think this is the most important thing, it points up how idiotic and silly the leftist/feminist notion that free speech is so dangerous they have to create “Speech-Proof” shelters to protect themselves from it really is. 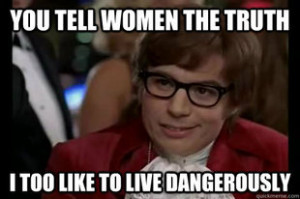