If inflation is about rising consumer prices, deflation means falling prices. If you have watched CNBC or any financial TV these last few years, you have seen people often raising the bogeymen of either deflation or his new buddy, “too-low inflation”. (A printed example here.)

The people raising these bogeymen are there to help Big Government and Big Banking. They gain from pro-inflation policies – such as high government spending and deficits, zero percent interest rates, massive money-printing (to cover the government’s deficits and boost the financial markets).

Who loses from such policies? You, the person with a productive job. Each year, the dollars you get from your wages, salary, pension or savings hardly go up – and buy you less than the year before. You’re the sucker at the poker game, and they frighten you into going along.

In reality, falling prices – or the steady, stable prices of “too-low inflation” – are a help to consumers in good times and bad. What sane person doesn’t benefit from (and desire) everyday low prices?

Inflationists claim that if consumer prices decline (as in deflation) or fail to rise (as in too-low inflation), the economy will suffer, because people will postpone buying consumer goods. You should ask: Really? When has the prospect of next year’s stable-or-lower prices ever stopped people from buying what they need and desire now?

Prices have been stable-or-declining for years on computers, smartphones, flat screen TVs, eye LASIK operations, game consoles, and more. Have people stopped buying them? Quite the opposite. Or suppose that prices stayed the same, or even went down, for gasoline, food, rent, health care and education. Would that hurt you and your family, or help you?

Inflationists also claim that deflation (or too-low inflation) means economic depression. And we’ve had an occasional episode, such as the Great Depression, where deflation was *correlated* with depression.

But remember the saying, “correlation isn’t causation.” In the Great Depression, the deflation actually helped a lot of people. By making paychecks go farther, it kept the number of people who were turned out of homes, starved, etc. from being even larger than it was.

And we’ve all been carefully ‘educated’ to forget that deflation and/or low inflation are historically *more correlated with good times*. Via Zero Hedge and The Cobden Centre, here is a chart on that. It shows how deflation prevailed in America in the 19th century, which century overall was the greatest for economic growth in our history. 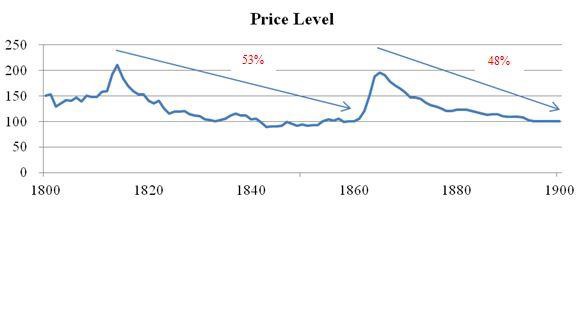 In their research article ‘Deflation and Depression: Is There an Empirical Link?’ of January 2004, Federal Reserve economists Andrew Atkeson and Patrick Kehoe found that “..the only episode in which we find evidence of a link between deflation and depression is the Great Depression (1929-1934). We find virtually no evidence of such a link in any other period.. What is striking is that nearly 90% of the episodes with deflation did not have depression. In a broad historical context, beyond the Great Depression, the notion that deflation and depression are linked virtually disappears.”

Which makes sense, because in the real world, economic progress means lower prices. As more things are produced with greater efficiency for lower costs, their prices drop – so that you can afford to buy them. It’s a good thing.

Interest rates would have to rise (to historically-normal levels). Real estate prices would come down (making homes more affordable). Stock and bond prices would come down (hurting Wall Street, but making retirement more affordable on Main Street). Bad investments would have to be liquidated (like some bad debts, or the craziest of the “green” or “dot-com 2.0” companies).

And, to allow for real growth and recovery, government would have to restrain itself (removing its jackboot from the economy’s throat; which Europe and even Japan have still not done). But at the end of it, we’d have a healthy economy where the working person can make ends meet; their wages, salary, pension or savings will buy them a good life. Which we don’t have, today.

It’s no coincidence that pro-inflation policies are pro-debt, anti-freedom policies. What we have today is the debt-bloated, gasping economy that you get after decades of such policies. An economy where the TV commentators tell you with a straight face that fast-rising prices (which make YOUR life harder) are required and, if we don’t keep inflation up at 2% a year or more, the world will collapse.

They’re partly right; their world (built on decades of bad policies) might collapse. But yours wouldn’t. Always remember the difference between their interests, and yours. Or who gains from inflation – and who loses.