Pale Penis-Bearer is hit with a “gender misconduct” complaint for referring to himself as handsome.

“The University’s Gender-Based Misconduct Office contacted us because they received a complaint about your behavior towards your Elementary Chinese II professor. It is important we meet to discuss this as soon as possible.”

I met with my dean the next afternoon. She told me the same thing my professor had: I had called myself handsome and this was unacceptable. My dean tried to make me agree that I would never do this again. I flat out refused. I laid into her about how upset I was about the situation and I said something along the lines of: “If you’re asking me to not be myself, then I guarantee I will end up back in your office again.”

I was then put in touch with a case manager from the Gender-Based Misconduct office, who set up a “re-education” meeting in his office for the following Monday. I remember this frightening little office was located outside of Columbia’s west gates, where no one can hear you scream (it may have moved since then).

The office was empty; it was just me in the waiting room: Ben “Gender Misconduct” Sweetwood. For the first few minutes of our meeting, the case manager launched into an edifying speech on how my white privilege was playing a major factor in my lack of clarity into the depravity of my actions. Then I shot back with a plea for sanity, in much the same way I had done with my advising dean.

I won’t spoil the ending. Suffice it to say, it partly involves a gay dude in a worthless bureaucratic taxpayer-funded job created for social justice wankers with no marketable skills. Read the whole thing.

A 52 year old man is insisting that he identifies as a six-year-old girl, and everybody is required to indulge his mental illness.

In an interview with the gay news site The Daily Xtra, Stefonknee (formerly Paul) Wolscht details his struggles with being a male-to-female transgender person.

At age 46, Wolscht deserted his wife and his seven children to live his “true” life.

Just remember, to the Social Left, “Stefonknee” is normal. It’s Christian people living in the suburbs, holding down a job, who maybe own a gun or two, who are the worst threat to society evers. 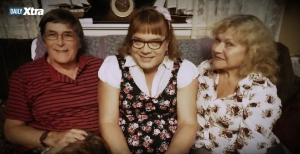 Bureaucrats at the University of Tennessee have issued new speech guidelines to prevent Special Transgender Snowflakes from being traumatized by correct use of the English Language.

We should not assume someone’s gender by their appearance, nor by what is listed on a roster or in student information systems. Transgender people and people who do not identity within the gender binary may use a different name than their legal name and pronouns of their gender identity, rather than the pronouns of the sex they were assigned at birth.

How do you know what pronoun someone uses? If you cannot use the methods mentioned above, you can always politely ask. “Oh, nice to meet you, [insert name]. What pronouns should I use?

If anyone were to ask me that, I would be likely to respond with the use of an imperative verb coupled with a second-person singular pronoun.

Multiple professors at Washington State University have explicitly told students their grades will suffer if they use terms such as “illegal alien,” “male,” and “female,” or if they fail to “defer” to non-white students.

This liberal/progressive vision of sex is simply bizarre. It reveals a male-female (or male-male, or female-female, or transgender-male, or whatever– you get the drift) relationship that is barren of feelings, of intimacy, or even basic friendship. It is a mirror into the liberal/progressive mindset that trusts no one and sees trauma, offense, and microaggressions lurking around every corner.”

The Faustian Bargain of the Left (“The Government will let you do whatever you want in the bedroom without consequences, so long as you submit to complete Government control out of the bedroom.”) has come full circle. If leftists were more familiar with the Parable of the Scorpion, they would have seen this coming.

Speaking of progressive leftist nutjobs who use their personal neuroses as an excuse to deprive others of liberty, some poor widdow snowfwake in Connecticut called 911 to report that a flea market was selling Confederate flags and Third Reich paraphernalia.